To Kansas to See the Chalk

I recently vacationed in Kansas, to the surprise of everyone I’ve told (they think Kansas is flat and covered with corn). It was a wonderful trip. I visited the late Cretaceous chalk, famous for abundant marine fossils and weirdly-beautiful sculpted rock made of microscopic shells. In my imagination, I was able to experience Kansas as it was 85 million years ago—at the bottom of a sea.

Kansas chalk formed during a time of peak sea level. The oceans didn’t just flood the coasts; they also invaded the continents creating shallow seas (vs. deep ones in ocean basins). One of these epicontinental seas—the Western Interior Seaway—stretched from the Arctic Ocean to the Gulf of Mexico across a broad swath of central North America, including Kansas.
The climate was quite warm, and there was no ice to speak of—no polar ice caps or sheets, no alpine glaciers. But melted ice alone doesn’t explain the very high sea levels, estimated to be 100 to 170 m (300 to 500 ft) higher than now. If all of today’s ice were to melt, sea level would rise only about 70 m (Miller 2009).

It’s likely that the ongoing breakup of the supercontinent Pangaea also contributed to rising sea level, but how is debated. Perhaps seawater was displaced by the underwater mountain chains that developed along rifts, or perhaps the higher seafloor spreading rates of the late Cretaceous produced hotter expanding crust, which displaced seawater (Miller 2009).
The Western Interior Seaway was not especially deep, but it was big. Between 87 and 82 million years ago, when it was at or near its peak, the seafloor that would become western Kansas was located far from land, out of reach of terrestrial debris—sand, silt and clay. Instead, biological sediments accumulated, mainly tiny exquisite coccoliths—wheel-shaped pieces of planktonic armor.
Coccolithophores are a type of plankton. Upon death, their calcareous armor falls apart into component coccoliths. They were so abundant during the late Cretaceous that their coccoliths rained down on seafloors in massive quantities, forming thick layers of limey muck. With time and pressure, the muck became rock. However, coccoliths are not that easily compressed, and the resulting rock is soft—chalk.

The most famous late Cretaceous chalk formed in the European Epicontinental Sea. This is the chalk of the White Cliffs of Dover and the Champagne province in the Parisian Basin of France. It’s so distinctive and well known that it’s often referred to simply as “the Chalk”—and is also the eponym for its time, the Cretaceous Period (creta is Latin for chalk).
Given the extent of the Western Interior Seaway, one would expect chalk to crop out elsewhere in North America. Indeed it does, at scattered locations from western Canada to Texas and Alabama, but never as charmingly as in Kansas, where curious chalk pinnacles and monuments (1) rise from the prairie. 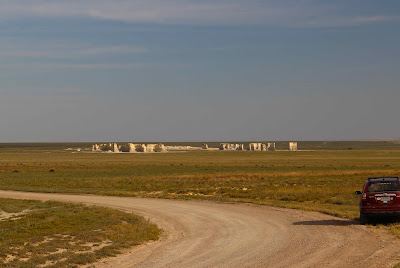 Above and below: Monument Rocks, also known as the Chalk Pyramids. 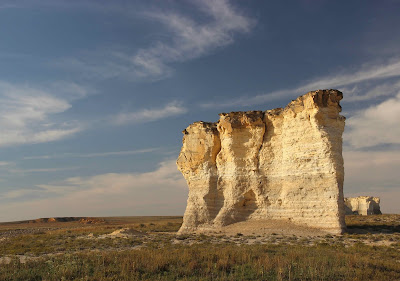 The chalk of western Kansas is the Smoky Hill Member of the Niobrara Formation, named for the valley of the Smoky Hill River where it was first described. Its constituent sediments date from 87 to 82 million years ago, when conditions in the Western Interior Seaway were just right for chalk. For five million years, coccoliths rained down. Occasionally dead creatures sank to the bottom, where they were preserved as fossils when the limey muck eventually turned to rock.

For millions of years, the chalk lay buried under shales, siltstones and sandstones—lithified detritus eroded off the mountains to the west. Then for reasons still debated, streams shifted from deposition to erosion. They became sculptors, cutting and carving sedimentary rocks to make drainages decorated with photogenic bluffs, cliffs, pinnacles, monuments and hoodoos—among the highlights of my trip! 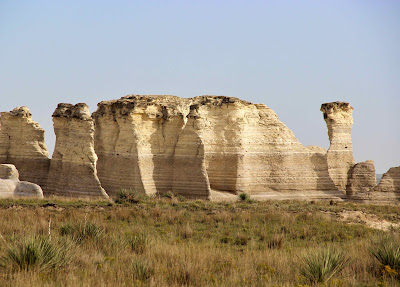 The Smoky Hill Chalk varies in composition and hardness. Sometimes a layer of “tough chalk” forms caps that protect underlying softer rock from erosion, creating ledges, pinnacles and monuments (Hattin 1982). But tough is relative. Geologically speaking, this protection doesn’t last long, and the life of a monument is almost as fleeting as ours (2). 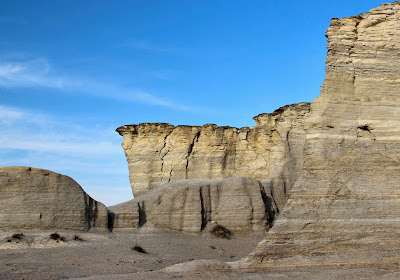 Above and below—this cap is coming apart. How soon will the monument fall? 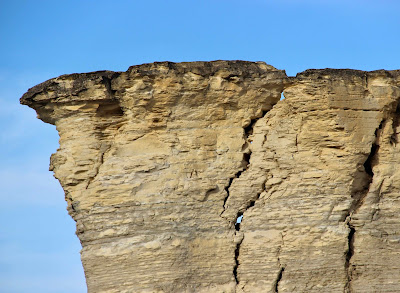 The Kansas chalk is most famous for its fossils—oysters, clams, fish small and huge, sharks, monstrous marine reptiles, birds, dinosaurs and more. But my fossil hunting was limited to gazing at masses of microscopic coccoliths and noting occasional thin layers of shell fragments. To see the more charismatic fauna, I visited several local museums.

The week before my trip, I ran into two friends—retired active adventurous types. “Any travel plans?” I asked. “We’re going to Tibet and China, and then to Everest Base Camp” she replied. “How about you?” “I’m going to Kansas” I said. There was a pause “ … Do you have family there?” “No” I said. “I want to see the chalk, the late Cretaceous chalk that’s the same age and composition as the White Cliffs of Dover, the chalk that’s so rich in fossils that it made western Kansas famous!” There was another pause, “ … sounds … interesting” he said. And it was. In fact, the trip was so interesting that I can't possibly fit everything into one post. More to follow. 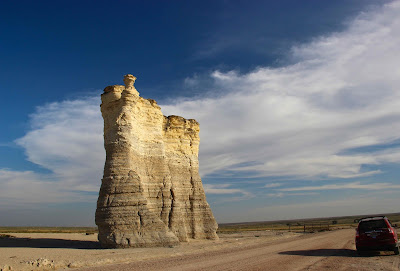 (1) It’s impossible to find a definition for “monument” as used in this context. But it’s a handy term. Many of these features don’t have the narrow pointed top characteristic of pinnacles. So like the locals, I use “monument”.

(2) Chalk monuments are short-lived even on a human timescale. Several famous ones have fallen in the last 20 years, e.g. the Sphinx and the tallest part of Castle Rock.

Buchanan, RC, and McCauley, JR. 2010. Roadside Kansas; a traveler’s guide to its geology and landmarks, 2nd ed. University Press of Kansas (for the Kansas Geological Survey).

Huxley, TH. 1868. On a piece of chalk (a lecture given to the workingmen of Norwich). Macmillan’s Magazine. Available online.

Prothero, DR. 2018. “Chalk” in Story of the Earth in 25 rocks; tales of important geological puzzles and the people who solved them. Columbia University Press.