Lace Curtain in the Desert 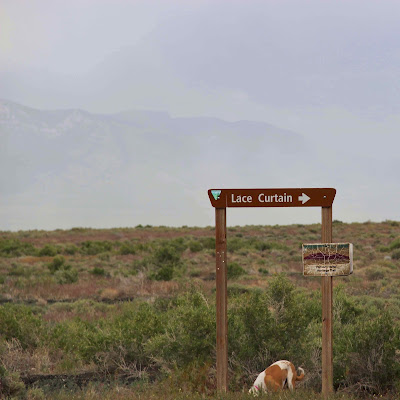 Why would there be a lace curtain out in Utah’s West Desert, and why would anyone want to see it? Maybe it's in a ghost town (they're popular)—a faded old curtain hung by some hopeful soul long ago, now blowing in the wind. But no … it's something much more intriguing. The road led to a tattered rock curtain, hanging on an extinct volcano. And not just any volcano but a hydrovolcano, born in a lake. Water explains the curtain … and more.
After driving several hundred dry sparsely-vegetated miles through western Utah, it was hard to envision this place being deep underwater just 15,000 years ago. But it was; the evidence is clear. During the cooler wetter times of the last glacial advance, much of Utah’s West Desert was covered by giant Lake Bonneville; the “Great” Salt Lake is a pond in comparison.

In 1876, geologist Grove Karl Gilbert published an exquisite map of Lake Bonneville (click on image below). It was indicated with light blue crayon; today’s lakes were colored dark blue. [In spite of the great care that went into the map, the scale was incorrect. A corrected version, on the map below, was pasted on later.]
Gilbert and EE Howell worked on several geographical surveys with the US Army Corps of Engineers, led by Lt. GM Wheeler. Among other things, they documented location and elevation of many relic Bonneville shorelines, visible as terraces above valley bottoms. They determined the maximum height of the lake, and based on known topography, mapped it in detail. Their map even shows smaller islands—the tops of today’s hills and buttes.

In the Sevier arm of Lake Bonneville (home of today’s Sevier Lake/Playa), there were at least 15 islands, many of which were volcanic. The highest was today’s Pahvant Butte (arrow below). “It is the tallest of all the volcanic hills, and, standing alone upon the plain, is a conspicuous landmark. Its general form is that of a cratered cone, but the crater is open at the south, and the circling crest has an acute culmination at the north” (Gilbert 1890). 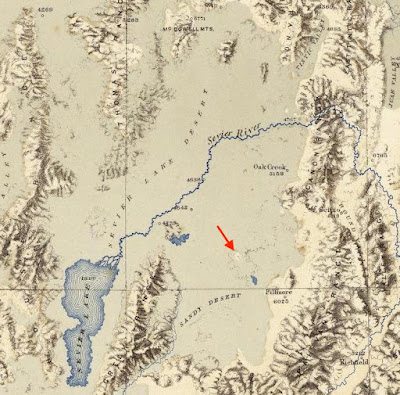 At the recommendation of a friend, I visited Pahvant Butte in late May. It’s hard to miss, being clearly visible from a distance. The state of Utah provides directions and roadsigns to the butte and other volcanic features in the Black Rock Desert.

From the Clear Lake Bird Refuge Road, the road to Pahvant Butte heads north, with fine views of the south side of the cone with its crater, and the Bonneville and younger Provo shorelines below. Not long after Pahvant’s last eruption, Lake Bonneville rose and breached the divide into the Snake River drainage in southern Idaho. It dropped to what’s called the Provo level. “The Bonneville shore-line is trenchantly drawn about the sides of the butte at mid-height. The Provo shore-line appears at its base” (Gilbert 1890).
When I reached the butte, I turned north and drove around it on a 2-track signed with a jeep-like symbol suggesting 4WD high-clearance. But it wasn't, at least not as far as the Curtain. My first stop was “underwater” at the base of the steep slope leading up to the old Bonneville beach. I like to ponder such things! 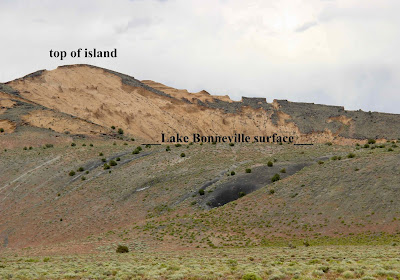 The next stop was for great views of the palagonitized tuff that forms the upper half of the butte. It was deposited after the volcano had grown above the lake surface. It’s thought that erupted material contained very hot water (1), which altered and consolidated the dark basaltic tephra (volcanic fragments) into yellow-brown palagonite. In contrast, material in the lower half of the butte was deposited underwater, cooled quickly, and was not altered (similar phenomena have been observed in Iceland; Oviatt and Nash 1989).

On the north side of the butte, I spotted the Lace Curtain. The 2-track to the base of the wall was rough but passable. 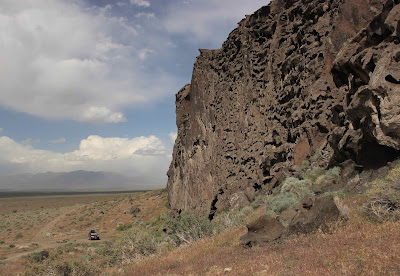 The Curtain is steep, suggesting the rock is hard and resistant to erosion. And yet it's quite eroded, in its own bizarre way. It's thought that in this area, mineral-rich groundwater (2) cemented volcanic deposits, though inconsistently. Then violent storm waves on Lake Bonneville beat against and eroded the north side of the butte, exposing the cemented rock. Waves continued to batter the rock, breaking it down. Inconsistent cementation explains the “lacy” pattern. 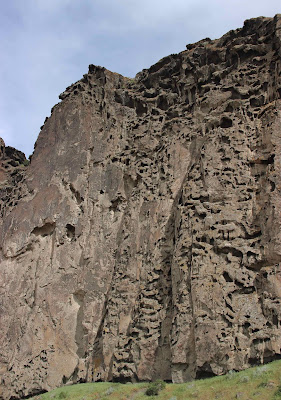 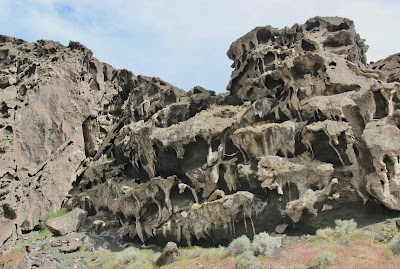 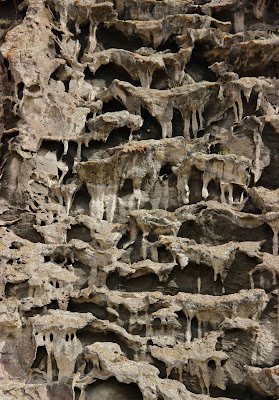 My photographic reverie was interrupted by shrill kik-kik-kiks—from two prairie falcons circling and diving overhead. One landed high on the Curtain and stayed for twenty minutes watching me, until I left. I had planned to camp on the old beach below the Curtain, and “watch” the sun set over Lake Bonneville. But I let the falcons have the place to themselves.

Back at home, I searched the scientific literature for information specific to the Lace Curtain. White (1996) studied only the underwater part of the Pahvant volcano; he makes no mention of the Curtain. Nor do papers about above-water deposits. Most online sources reference Case (2002):

“… intense storm waves cut a vertical cliff into the cone. The cut exposes an intricate lacy pattern caused by the partial cementing of the tuff by minerals in ground water. The cliff is known as the ‘Lace Curtain’ because of its white color and mysterious lacy pattern.” (italics added)

If you know of more information about the geology of the Lace Curtain, please add a Comment below.

(1) Experts disagree on the source of water for palagonitization. Some suggest groundwater (e.g. Case 2002), others lake water (e.g. Oviatt and Nash 1989).

(2) Cementing is sometimes attributed to Lake Bonneville water rather than groundwater. But it seems too localized to be due to lake water.