Devils Tower is a sheer rock monolith that stands 1200 feet above the Belle Fourche River in northeast Wyoming. It’s about a mile around at the base, and tapers to a summit the size of a football field. Getting to the top isn’t easy—the only legal way is technical rock climbing. Less than 1% of visitors to Devils Tower National Monument make to it the summit, so perhaps it’s not surprising that the most common question about the Tower is “What’s on top?” (The most common question overall is either “How do we get to Mount Rushmore?” or “Where are the bathrooms?)
So I guess I shouldn’t be surprised that my most popular blog post ever is Devils Tower—What’s on Top?, but I am. It’s not about rock climbing or spaceships, but rather plants and vegetation. How many readers really want to know that sagebrush, grass and wildflowers grow on the summit? I think folks land there by accident. In any case, it’s time for an update.

This year, the National Park Service contracted with us to inventory plants and assess summit vegetation. In a sense the project is “almost” done. However, I have to finish the report and I hate writing reports. I’d much rather be blogging. A few days ago, I had a brilliant idea—do both at the same time.

This week I'm compiling information about summit plants that would be of interest to visitors. The Park Service will use it in interpretive materials available at the Monument and online, and may add it to employee training. So I’m wondering:

What would you want to know about what’s on top? What would you find interesting and memorable about plants on the summit? (please add Comments below)

This is what I’ve come up with so far (photos are for this blog post only, and not all are from the summit):


The top of Devils Tower is a rounded rocky hilltop. From the high point you wouldn’t know there were precipitous walls below if you hadn’t just struggled up one. Plants are common among the rocks—in fact plant cover roughly equals that of bare rock. Skunkbush sumac bushes and clumps of bluebunch wheatgrass grow scattered across much of the summit. In the northeast part, where the soil is deeper, there’s a small but vigorous stand of sagebrush and grass.

How do plants get up there? Wind is the most likely means of seed transport. But small mammals climb Devils Tower too—chipmunks, packrats, and deermice have been seen on the sides and summit. Maybe they haul a few seeds up there on occasion.

How can plants grow in rock? Over the long term, rocks are not as permanent as they look. They fracture, weather, and turn to dust. Dirt and debris slowly accumulate in small pockets, where seeds sometimes land. A few germinate; a few of these grow into plants. Their roots help break up the rock, one tiny bit at a time.

It may seem unlikely that seeds will land in just the right place and survive, but obviously they have. The top of Devils Tower is botanically diverse, with 53 species—impressive considering it’s only the size of a football field and really rocky.

At first glance, the summit looks dry and harsh—hospitable only to hardy drought-tolerant grasses and shrubs. But there are lots of favorable microsites. Thirteen plant species on the summit grow only in the shade of rocks and shrubs. Ferns grow in crevices with shade and soil … and a bit of flowing water when it rains.
In late spring, the summit turns green with grasses and wildflowers. Some of the showier species are sego lily, prickly pear cactus, harebell, western yarrow and wild onion. Common grasses include bluebunch wheatgrass, needle-and-thread, and blue grama. Shrubs are common too, especially skunkbush sumac and Wyoming big sagebrush.

Are any plants unique to the summit? No—all grow in the surrounding area too. However, Wyoming big sagebrush is much more common on the top of Devils Tower than anywhere else in the Monument (it’s extremely common further west in the basins of Wyoming).

Here are a few of the plants that greet rock climbers when they reach the top:
When the large waxy yellow flowers of prickly pear cactus bloom, everyone notices. Otherwise it’s drab and easily overlooked, and painful when accidentally bumped!

Two different kinds of sagebrush grow on the summit: Wyoming big sagebrush and fringed sage. Sagebrush is not related to the sage we use in cooking, but was named for the sage-like fragrance of the leaves.

The 3-parted leaves of skunkbush sumac suggest poison ivy, and indeed, the two are close relatives. But this sumac is not at all poisonous. In fact, its twigs  have long been used to make a citrus-flavored tea. The appealing fragrance explains the scientific name—Rhus aromatica.

Harebells look delicate, but they’re actually quite tough, surviving even where there’s very little soil. They grow in cracks on the sides of the Tower, and among rocks on top.

One of the more common plants on the summit is rock spikemoss, but it’s rarely noticed. It’s a close relative of the resurrection plant, and behaves in a similar fashion. Rock spikemoss grows and produces spores during favorable conditions in late spring and summer. Then it lies dry and dormant, looking quite dead, as it awaits “resurrection” with next year’s spring moisture.

No one expects to find trees on top, but there is one. A ponderosa pine has managed to survive on minimal soil and water in a crack. Never underestimate a plant! 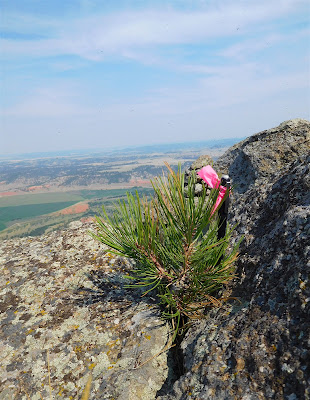 One more question—what do you think about including scientific names? Botanists like them, as they’re information-rich. But others find them off-putting.

Here’s the current list of summit plants. About thirty were known prior to this project. After systematic careful searching—three visits scattered through the growing season, 20 person hours in all— the known vascular plant flora now stands at 53 species. 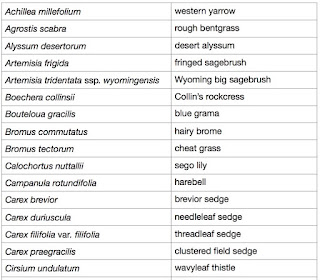 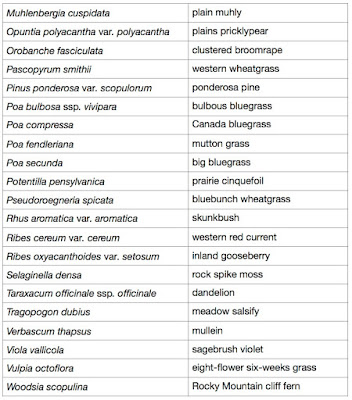