Am I following a cottonwood of the bitter kind?

... we arrived on the 10th March at a small branch of the North fork of the Platte, where we found an abundance of wood.  This stream is about one hundred feet wide, meandering north-eastwardly through a beautiful and fertile valley ...  It’s margin is partially wooded with large cottonwood of the bitter kind.  The sweet cottonwood ... is nowhere to be found    William Henry Ashley, 1825 (Dale 1918)

Cottonwoods were an important winter fuel in the American West in the 1800s, not just for heat but also to fuel the main mode of transport – the horse.  When grass was poor or covered in snow, the inhabitants – Indians, explorers, trappers and early settlers – collected young branches and inner bark to feed their horses.


Young cottonwood branches and upper branches of older trees were provided as forage for their [Teton Dakota] horses and were said to be as “good for them as oats.”  White trappers and travelers have recorded their observations as to the value of the cottonwood as forage.  (Gilmore 1919)

When the round leaf or sweet-bark cottonwood can be had abundantly, horses may be wintered with but little inconvenience.  They are very fond of this bark, and, judging by the effect produced from feeding it to my horses last winter, I suppose it almost, if not quite, as nutricious as timothy hay.   William Henry Ashley, 1825 (Dale 1918)

Horses survived and even thrived on sweet cottonwood at lower elevations, but they wouldn’t eat the bitter cottonwood of higher valleys and mountains.  In winter a horse would starve in these places.
Fur trader William Ashley and a small band of trappers camped for several days in the Laramie Valley in March of 1825, while exploring a “central route” to the Pacific.  They had been in the region long enough to know the cottonwoods.  They recognized those along the river as “of the bitter kind” while "The sweet cottonwood, such as affords food for horses, is nowhere to be found" (Dale 1918).


Not all trappers were as savvy.  In the fall of 1831, a party led by Captain AK Stephens chose the Laramie Valley for their winter camp.  Game was abundant, and the river was lined with cottonwoods.  But they didn’t notice that these were the wrong kind until the snows came; then it was too late to move.  They survived, as there was plenty of game and firewood, but their horses didn’t.

On new-years day, notwithstanding our horses were nearly all dead, as being fully satisfied that the few that were yet living must die soon, we concluded to have a feast in our best style; for which purpose we made preparation by sending out four of our best hunters, to get a choice piece of meat for the occasion. These men killed ten Buffaloe, from which they selected one of the fattest humps they could find and brought in, and after roasting it handsomely before the fire, we all seated ourselves upon the ground, encircling, what we there called a splendid repast to dine upon. Feasting sumptuously, cracking a few jokes, taking a few rounds with our rifles, and wishing heartily for some liquor, having none at that place we spent the day.  Zenas Leonard, 1832 (Leonard 1904)

When a bitter narrowleaf cottonwood crosses with a sweet Plains cottonwood, what's the result ... bitter or sweet? 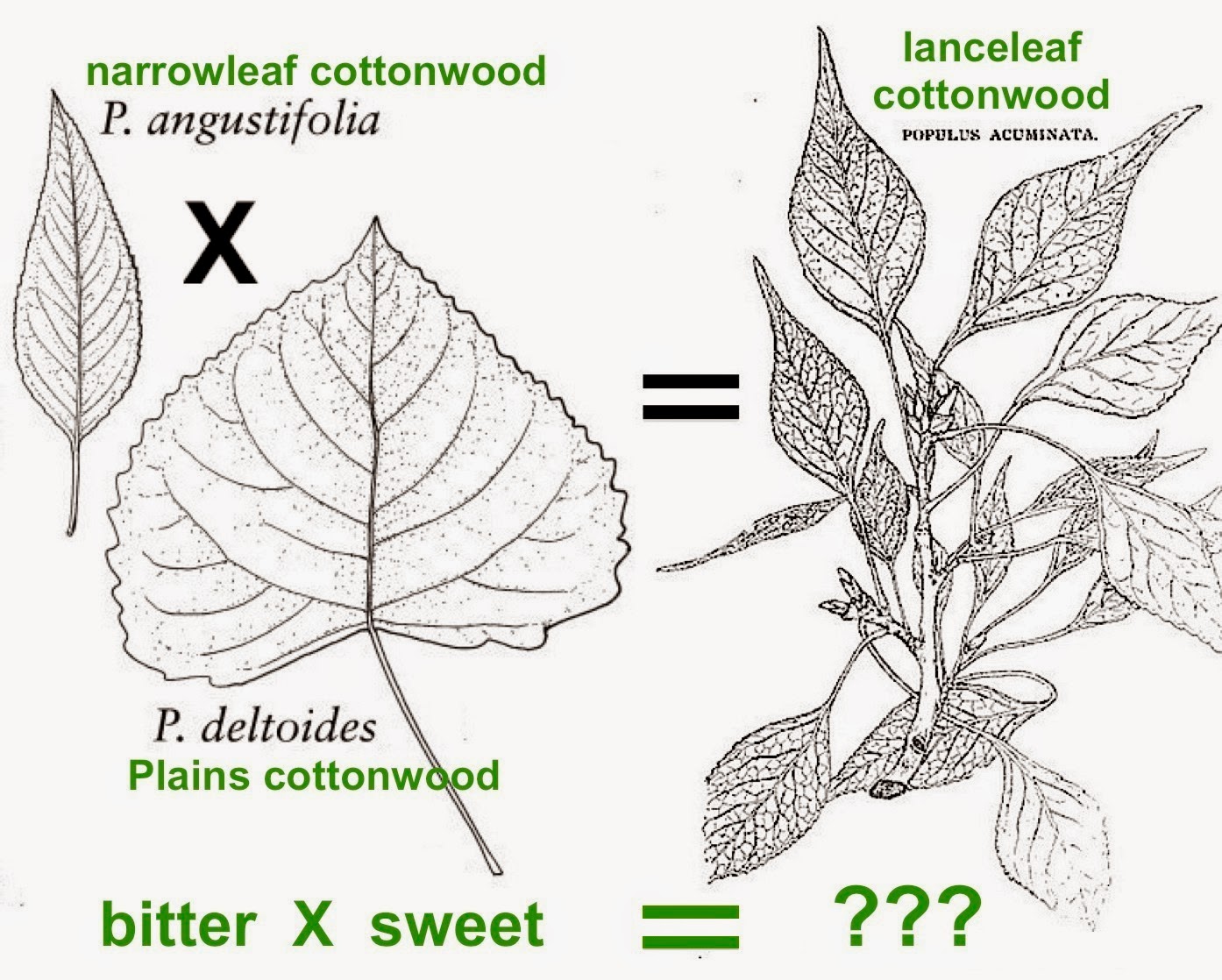 Maybe I'll recruit friends to taste the inner bark of the three cottonwoods.  We could do blindfold taste tests ... how scientific!  But will I find any such intrepid companions? 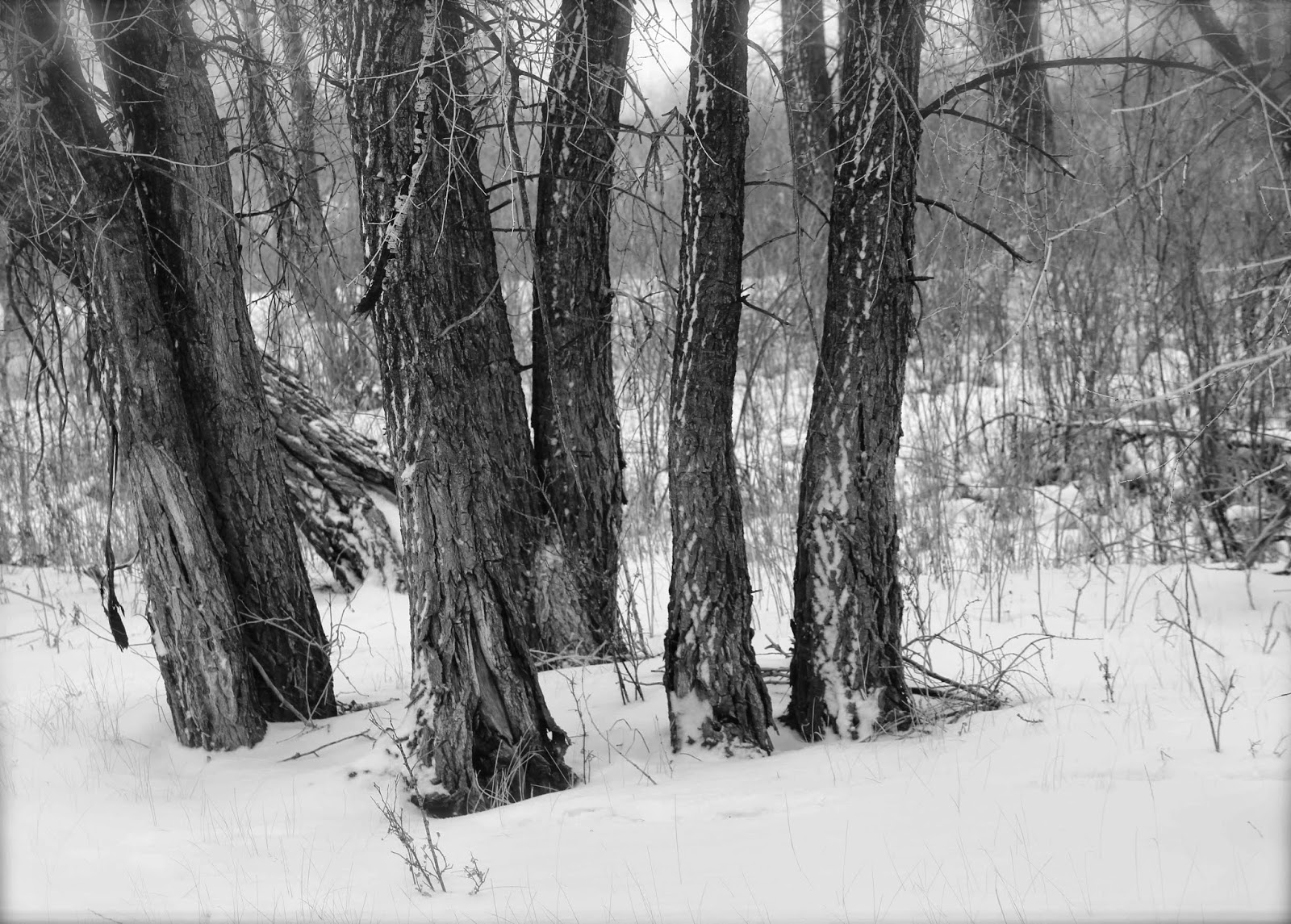 Was it lanceleaf cottonwoods that the trappers camped in, finding them as bitter and unpalatable as the narrowleaf “parent”?  Or did they camp among narrowleafs – the true bitter cottonwoods?  To answer this, we need to know where specifically narrowleaf and lanceleaf (hybrid) cottonwoods grow in the Laramie Valley and vicinity.

I thought this would be easy to figure out.  In Laramie we’re lucky to have the Rocky Mountain Herbarium, at the University of Wyoming.  It's the largest herbarium between St. Louis and those on the West Coast, and the largest anywhere for Rocky Mountain plants.  The local area is generally well-represented, yet when I looked for lanceleaf cottonwood specimens from the Laramie Valley, I found only four ... and none from the river.  Most were collected on the university campus.  There was one specimen of narrowleaf cottonwood from the river, upstream in the mountains to the west.


This summer when mature leaves are available, I’ll collect a specimen from my cottonwood and add it to the Rocky Mountain Herbarium, thereby immortalizing the tree!  Hopefully I can decide what this cottonwood would best be called.  Is it sufficiently different from the narrowleaf to be called a lanceleaf?  With back-crossing, every variation is possible.  If time permits, I’ll visit other places along the river to see which cottonwoods grow where.  There's so much to learn ...

Was my tree alive when Ashley traveled along the Laramie River in 1825?  Did Stephens and his trappers spend the winter near it in 1832?  If so, it would have been a young sapling or sucker shoots.  Cottonwoods grow fast and generally die young, only occasionally reaching 100 years of age or more (Weir 2014).

☞I’m grateful to Steve Sutter, Cultural Records Specialist with the Wyoming State Historic Preservation Office, for introducing me to the role of cottonwoods in early exploration of the American West.  A simple question – "what kind of cottonwood grows along the river?" – and the discussions that followed made this post possible.

Gilmore, MR.  1919.  Use of plants by the Indians of the Missouri River region.  Bureau of American Ethnology. 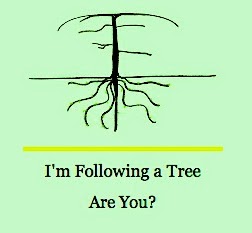