The Girls are in Bloom (too)

Quaking aspen don't get much attention these days.  Most people are gawking at and raving about brightly-colored spring wildflowers, especially the pasque flowers, while the aspen trees remain leafless, just standing there, seemingly doing nothing.
But looks are deceiving of course.  In reality their growing season is already well underway ... just look at the trunks.  Aspen are famous for smooth white bark, but in this stand it’s more of a pale green, especially on younger trees.  The bark contains chlorophyll, for converting sunlight to energy, and these trees are photosynthesizing even without leaves. In fact, the green bark may out-produce the leaves until well into the growing season (Pearson 1958).

Not only are the aspen photosynthesizing, they’re in full bloom!  Few notice because the flowers are so small and drab ... though in the right light, they can be quite lovely.
Aspen are dioecious, i.e. male and female flowers are found on separate individuals.  Moreover, aspen readily spread by vegetative propagation (root sprouts), so an entire stand may be a single individual and all trees will be the same sex.  Until last week, all stands I had hiked through were male.

Male aspen flowers are reduced, incomplete and imperfect ... but hardly inadequate!  They should be admired for their elegant efficiency.  They have just what it takes to produce pollen and cast it to the wind.  [reduced = tiny; incomplete = missing parts; imperfect = unisexual]
Male quaking aspen were featured in a previous post, The Boys are in Bloom. The only reason I didn't include female trees was that I hadn't seen any.  Now finally I have.
The female flowers are showier than the males.  They're green for one thing, and bigger, especially as the ovaries ripen.

A female flower consists of a pistil perched on a cup-shaped disc.  The plump ovary is topped by a brown 2-lobed stigma, ready to receive pollen (click on photo above).  Below, pistil in cup-shaped disc on left; capsule on right has split to release seeds; from FNA. 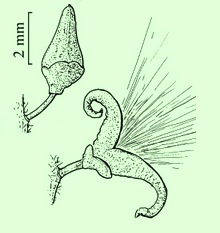 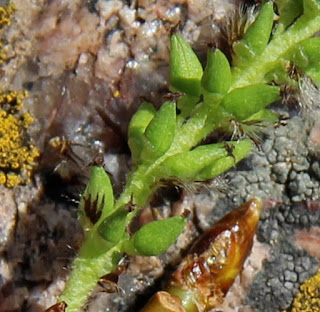 With time, the ripening ovaries swell and the stigmas wither.  At maturity, each ovary becomes a capsule containing seeds topped with fine hairs.  Eventually the capsules will split, and the seeds will take to the wind.  In the photo above, suture lines are visible on some of the young capsules.  Note fringed floral bracts and remains of brown stigmas.

Why has it taken so long to find female trees?  Are they less common?  I can’t say as I haven’t sampled sufficiently (should hike more, work less).  Do females bloom later?  I don’t think so -- I saw both male and female catkins on my hike last week.  The males were drooping, looking tired and spent.  The females were fully elongated, with plump green capsules.  The flowering season was coming to an end. 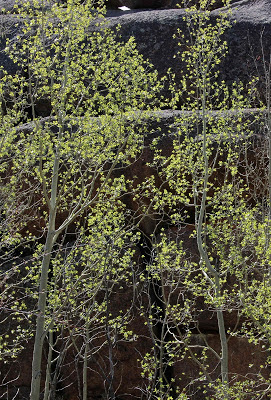 I kept on through the shady grove.  It was chilly and I was thinking about turning around when suddenly I was surrounded by trees glowing in the sunshine.  They were starting to leaf out.  Young aspen leaves are yellow-green -- not nearly as showy as the brilliant gold and orange ones of fall, but gorgeous enough when backlit!