March Berry Go Round is Here

Starting with the big news ... I saw my first wildflowers of the season last week! (always an exciting thing).  Biscuitroot is in full bloom but of course it gets very little attention being so small and drab.  It’s “no real beauty” and has “sordid whitish flowers”.  But if you look close, you might see a colorful green anther hanging out of a tiny flower, sending pollen to some waiting stigma somewhere.

And now ... what everyone has been waiting for ... this month’s Berry Go Round, featuring contributions guaranteed to both entertain and edify.

For an abundance of bright spring color, see Geotripper’s photos of wildflowers in California’s Great Valley and Sierra Nevada foothills -- here, here and here.  In 1868, John Muir was walking east from the Bay Area to “any place that is wild” when he reached Pacheco Pass and discovered ...

“a landscape was displayed that after all my wanderings still appears as the most beautiful I have ever beheld.  At my feet lay the Great Central Valley of California, level and flowery, like a lake of pure sunshine, forty or fifty miles wide, five hundred miles long ...”

Now of course it's all agriculture, towns and cities.  These photos hint at how spectacular it must have been in Muir’s time.
Seeds Aside and I both recommend The Range of Lotus at Catalogue of Organisms.  I had to chuckle when I too fell into the trap of common names.


Seeds Aside submitted several posts as well, including one on the white asphodel, which is pyrophytic (now you’ll have to read it!), and an explanation of the Not Possible yam -- which is a true yam, not one of the impostors of the USA.  Also of interest -- Seeds Aside gathers a batch of interesting posts together each week, most recently here where you will find a link to a post about the other lotus. 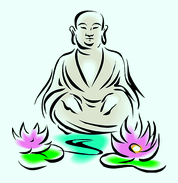 Tim of Notes of Nature has done several posts inspired by Danny Chamovitz’s book, What a Plant Knows, including one about Plants and Sight.  Yesterday he provided a nice review of the book -- definitely sounds worth reading.

This month's BGR includes two posts about mountain mahogany (see the plants-and-rocks section below for the second).  In Something with Leaves, Sally at Foothills Fancies explains how nice it is to see something green in a landscape otherwise “bleak and brown” ... alas, the wildflower season is a ways off yet for some of us.

Climate change also cropped up twice.  Susannah of The Modern Forest gives a good example of how difficult it can be to predict vegetation response to climate change.  A forest of long-lived trees may be able to tough it out longer ... but might that actually be a problem for forested landscapes?

Don't miss Cujo359’s careful analysis of spring flowers (specifically those of the CCCT!), Mt. Rainier, the Moon and climate change, over at Slobber And Spittle.  Ah ... the power of science! :-j

Here’s something to ponder ... Jessica of Moss Plants and More has a post about the Jekyll and Hyde nature of plants with their alternation of generations, linking to a recent article in Science about what's behind it all in the genome.  Think about it -- some plants (ferns come to mind) take on very different forms in their sporophyte and gametophyte stages, yet the genome differs only in the number of copies of chromosomes (one vs. two).  In other words, one genome can yield two very different phenotypes (maybe like caterpillars and butterflies?).  What's going on?

My phyto-knowledge was expanded considerably by two posts by The Phytophactor.  Water ferns were only a vague memory from my taxonomy class, not sure why ... they're fascinating plants.  I had never heard of screwpines, which aren’t pines nor do they look like pines -- much more photogenic actually.
I wrote about one of the more important 19th-century botanists of the American West, John C. Frémont (what??!!).  Though much better known as a topographer, explorer and dysfunctional military leader, Frémont collected plants on all five of his expeditions for the Army Corps of Topographical Engineers (USA), including 163 novelties, 40 of which were named in his honor.  But was he really a botanist?
Here are a few more gems I found while wandering about the phytoblogosphere:

Bees like caffeine too ... and some flowers take advantage this, explained here at SciLogs.

Botanical illustrations can be so beautiful in a simple elegant black-and-white way ... like this one.  View in full resolution by clicking on the illustration.

Now on to plants and rocks ...

Lockwood of Outside the Interzone found a neat example of a puzzling distribution of plants on the landscape.  It’s all the same stuff on the surface so why do we have ponderosa pine here and here but not here?   Any ideas?  Is it history? was there a localized burn -- did a batch of cones end up in one place but the another?  It just might be differences below surface ... something about plants and rocks ...

Silver Fox at Looking for Detachment submitted a post about one of my favorite nature puzzles, the association of plant species or vegetation types with specific kinds of rock, in this case Mountain Mahogany and Rhyolite.  And you can join her on a Hike near Jarbridge (Nevada) for beautiful views of plants and rocks.

David Bressan at History of Geology posted about a really cool example of plant/rock interaction -- Tiny Plants Creating Big Rocks -- and from an interesting historical perspective.

I found an intriguing post about Bornmuellera baldaccii, a nickel hyperaccumulator.  Might bornmuellera be used to clean up toxic sites, or even serve as a source of nickel?

My final recommendation is about blogging in general -- Ask TON:  Why blog? at The Open Notebook.  I often ask myself this very question ...  “Why blog?  It takes a lot of time and energy that you might otherwise spend on higher paid work.  What do you get out of blogging?”  Some excellent bloggers responded with morale-building encouragement, for example from Jennifer of The Artful Amoeba:

“Blogging is an especially good format if you have a distinctive voice or like to use humor.  ... I am bursting with enthusiasm for my subjects, and on my blog, I can convey that in my own voice.”

“I blog because Jack Kerouac and Allen Ginsberg were my literary heroes when I was young, and they launched a world-wide progressive cultural movement called the Beat Generation by printing their inspired poems and stories in “little magazines.” We can only imagine what they would have done with a low-cost global multimedia platform that enables the audience to find YOU.”

Email ThisBlogThis!Share to TwitterShare to FacebookShare to Pinterest
Labels: Berry Go Round