Follow the character in black down the steps to near the bottom of the photo, just right of center.  Do you see the plant growing out of the concrete, among accumulated dead leaves and a cigarette butt?  This is one of the most widespread plants in the world, though it routinely ignores an important rule for evolutionary fitness.

The leaves reveal its identity.  It’s a dandelion, also known as telltime, clocks, blowball, piss-a-bed, amargón, Taraxacum officinale and many other names. 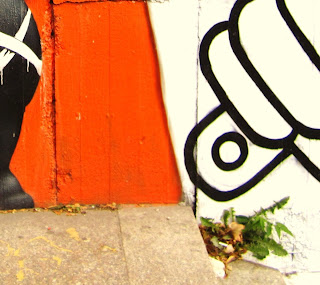 The name by which we in the USA know it best -- dandelion -- comes from the French dent-de-lion or lion’s tooth, perhaps referring to the pointed lobes of its leaves.  Or perhaps it's the resemblance of the yellow flowers to golden teeth of heraldic lions (Dana 1893), though when I consulted Wikipedia I found no such critters -- only red-tongued varieties. 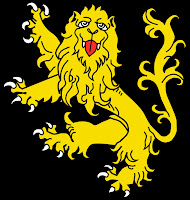 As for all members of the aster or composite family, the dandelion's inflorescence (flower cluster) is a head with many small flowers, called florets.  Pull out and pull apart a floret and you will find it contains all it needs to be a flower, i.e. reproductive organs.  Each has a corolla (petals, modified into a tube and strap), stamens (male) and a pistil (female).
The ovule in the ovary of each floret matures to become a seed in a small dry ribbed fruit topped with a parachute, ready to travel far and wide on the wind.  The flat flowering heads turn into round fluffy balls often called clocks -- the basis of another of the dandelion’s names:  telltime.  Hopefully there still are children that tell time by blowing seeds from a clock and counting the number that remain.  Sometimes seeds blown from a dandelion carry the thoughts of one smitten with love, messages to an absent sweetheart.
Budding botanists usually are taught early on of the importance of outcrossing in plants, and of the many mechanisms that have evolved to discourage self-pollination.  Plants that pollinate each other rather than themselves produce more vigorous offspring, more adaptive variation, greater chances that their lineage will live on.  Or so they say.  But no one told the dandelions.

Most dandelions are apomictic.  They produce seed asexually, without pollination and fertilization, and though deprived of the evolutionary advantages of sex, they do quite well. Puzzling?  Not so much anymore, for our thinking has changed.  Dandelion offspring might have the same DNA as their parent, but other kinds of inter-generational information can differ.  Turns out environmental- and stress-induced epigenetic variation can be inherited too (Verhoeven et al. 2010), and the trials and tribulations of a parent can be reflected in its offspring!  This reeks of Lamarkism, inheritance of acquired characteristics, which we were taught was wrong.  Guess that was wrong too.

Able to reproduce without pollination, adept at dispersal, prepared to colonize the tiniest bit of open habitat -- it’s no wonder dandelions have done so well.  And their growing season is long.  They are among the first flowers of spring and the last in fall.
The common dandelion, Taraxacum officinale, is native to Eurasia but now is a global plant.  It grows in southern Africa, South America, New Zealand, Australia, India and North America, where it occurs in all states and provinces of the USA and Canada.  It probably was introduced to North America by early colonists, for dandelions were in wide use in Europe as food, wine and medicine.

Dandelions are still used today.  Leaves are collected for salads, though slightly bitter (hence the Spanish name, amargón); they are high in vitamins A and C, iron and calcium.  Dandelion wine is made from the flowers.  The root is medicinal -- a diuretic -- and is the reason behind another of the common names, piss-a-bed.

In spite of their brightness, beauty, benefits, symbolism and amazing adaptations, dandelions often are treated as weeds, unfortunately.  They are especially vilified as the curse of lawns (themselves a curse! ... and self-imposed).
Who would not find a field filled with bright sunny dandelions delightful?  They are symbols of hope, love and childhood, the summer ahead and the vigor of life!  I always look forward to their reassuring emergence each spring.