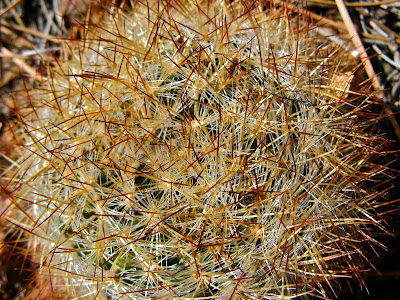 Cacti are odd plants -- they lack leaves, photosynthesis takes place in their fat green stems, and most are covered with pain-inducing spines.  Yet they are charismatic.  We find their unusual forms striking, beautiful, even enchanting.

Their vicious spines are lovely too -- arranged as they are in such elegant patterns.
Cacti are not the only spiny plants in the world, though spines often prompt people to call a plant a cactus.  When I lived in northeast Wyoming, I was a resident botanist of sorts and one day Shirley asked me “What’s that cactus in my garden with yellow flowers and leaves like a watermelon?”  I was puzzled, though I should have guessed from her apt description. It was buffalo bur (Solanum rostratum) -- quite spiny but not a cactus.

Only in the cactus family (Cactaceae) are spines arranged in clusters.  These develop in leaf axils -- where the leaves join the stem.  But wait -- cacti don’t have leaves!  It turns out they do, but most are tiny and soon fall off.
The spines themselves often are referred to as highly-modified leaves, but we still aren’t sure.  There are two interpretations as to how spines developed evolutionarily.  They may be highly-modified leaves on specialized condensed shoots (side branches), or they may be modified bud scales (also modified leaves, which cover an embryonic shoot).

At maturity, spines and leaves are very different.  Spines have none of the usual leaf features, like blades, veins, stomates and photosynthetic tissue.  Instead, they contain fibers and thickened, almost woody epidermal tissue, neither of which is found in leaves. Thus different sets of genes are utilized during development.  Finally, spines are basically dead, while leaves are composed of living tissue.  So why call spines modified leaves? ... because both develop from the same type of embryonic structures -- leaf primordia.  Bud scales come from these primordia too, hence the confusion.  See Mauseth 1976 and 2006 for more details and discussion. 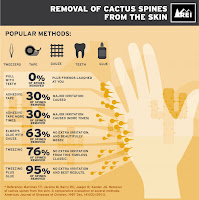 Members of the prickly pear subfamily (Opuntioideae) have two types of spines -- the normal type we’re used to seeing, and insidious hair-like little buggers called glochids.  The larger ones generally stay put when bumped, but glochids come off easily.  They can burrow into the skin, are hard to find, and sometimes seem impossible to remove.  Chart courtesy REI (click to view). 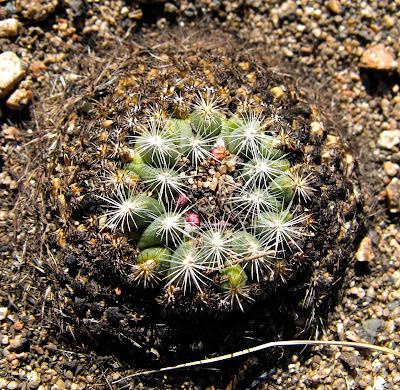 Spines develop on structures called areoles.  Wikipedia explains that these are “highly specialized branches on cacti ... apparently they evolved as abortive branch buds while their spines evolved as vestigial leaves.”  “apparently” is the proper adverb in this case; as with spines, more work needs to be done to understand the evolutionary path to areoles. Above and below:  a pincushion cactus (Coryphantha vivipara) post-burn on Sheep Mountain, southeast Wyoming.  In the recovering plant, green tubercules are visible, with clusters of spines growing from the areoles on top. 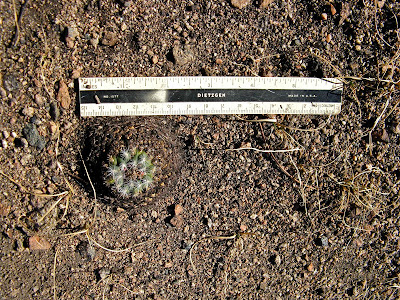 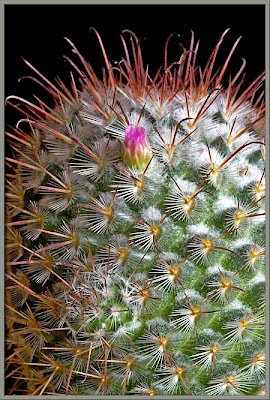 Left:  Mammillaria bombycina, by Brian Johnson (Micscape); used with permission.  Spines are clustered on areoles at the top of tubercules.  For more stunning photos and photomicrographs of cacti, see Brian’s A Close-up View of Several Members of the Cactus Family.  Even if technical details of cactus anatomy are not your thing, this site is still well worth visiting -- for the incredible beauty of the portraits.

Areoles also are where cactus flowers develop -- those beautiful, colorful blooms that contrast so strikingly with the dull green plants. 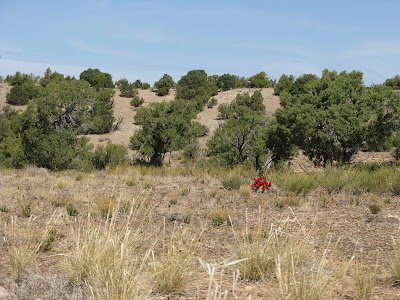 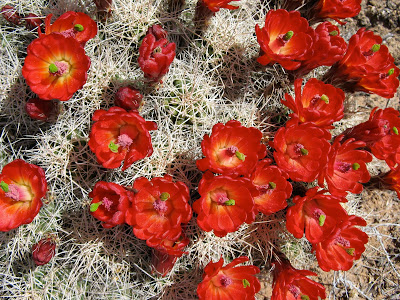 Areoles commonly occur on tubercules, but they also may be arranged along ribs, as in Echinocereus viridiflorus, the hedgehog cactus below. 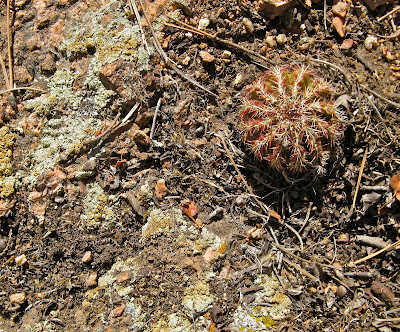 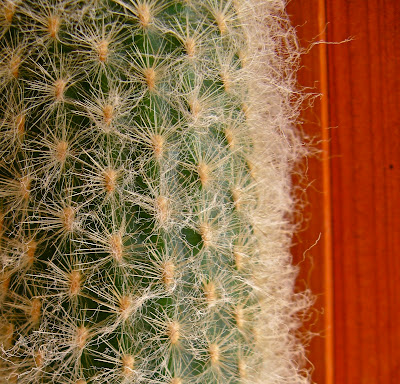 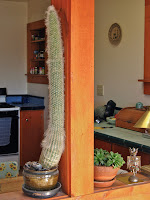 Along with spines, this "old man cactus" has "whiskers" -- hairs said to have evolved to shade the stem and reduce water loss.  But who knows?  Maybe they really evolved to appeal to people -- who take them in and care for them  ;-)

CactiGide.com is a handy reference site for cacti.

Dalhousie Collection of Cacti & Other Succulents at Dalhousie University  http://cactus.biology.dal.ca/index.html