The Queen of Spices

Though the Queen of Spices was crowned over a thousand years ago, she does not have much of a following in the United States -- in spite of the rapid expansion of coffee consumption and culture.  The flavor and buzz of rich strong coffee appears to be irresistible, and even small towns in Wyoming now offer espresso, usually pronounced express-o and defined as “a whole pot of coffee in one cup”.  But gahwa remains largely absent from coffee menus in the US.  Perhaps it is time to introduce the Queen.

Cardamom is considered the second most important spice in the world, surpassed only by black pepper, the King.  But the King comes cheap whereas the Queen is dear.  Cardamon is the third most expensive spice, after saffron and vanilla.  It was valued at US$781 per ton in 2004; total consumption was around 55,000 tons with approximately 40% consumed outside the country of production, making it a very lucrative trade item (Prosperity Initiative 2009).  Cardamom is not cheap -- this 2 oz bottle was $14.00 at the local grocery store.

Green cardamom, Elettaria cardamomum, is native to India, Sri Lanka and parts of southeast Asia.  It is a member of the plant family Zingiberaceae, which also includes ginger and turmeric.  This is the highly-valued “true” cardamom, not to be confused with cheaper substitutes, variously called false, black, Nepal, hill or large cardamom (all are species of Amomum).

Cardamom is a plant of the tropical forest floor, requiring shade, warmth and humidity.  It grows as dense clumps of stems with large sheathing leaves, to as much as 6 meters in height.  The flowers and fruit are borne at the base of the plant on much shorter stalks. 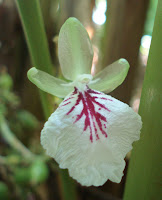 It takes 2 to 3 years for a young cardamom plant to produce flowers.  These are small, pale green and inconspicuous at first glance, but a closer look reveals that each flower has a larger white petal with a lovely delicate violet pattern.  Photo to right by Reji Jacob.

The cardamom fruit is a small fleshy capsule divided into three chambers filled with tiny seeds.  These are the treasures of the cardamom, containing highly aromatic volatile oils with a flavor described as “sweet-balsam-eucalyptus”, “warm and comforting”, “mysterious”, “sweet and pungent”, “sparkling”, and “dark and intriguing, with a hint of sweetness” (mine) ... but of course in reality cardamom's flavor is impossible to describe. 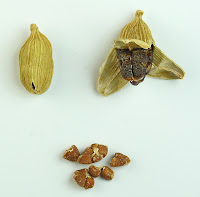 The pods are harvested by hand while still green, to avoid splitting and loss of the precious seeds.  They are then dried and sold whole to retain flavor.  Eventually the seeds will be ground or the volatile oils extracted for use in a wide variety of products including food, beverages, mouthwashes, perfumes, Ayurvedic medicine and aphrodisiacs.

Photo to left by Quadell; seeds are approximately 3 mm long. 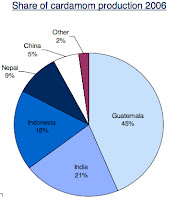 Until the early 1800s, most cardamom was harvested from wild plants of the Cardamom Hills, in the Western Ghats of southern India.  Cultivation began with the British, who intercropped shade-requiring cardamom plants on coffee plantations.  India remains one of the largest producers and exporters of cardamom, but the leader is now Guatemala, where green cardamom cultivation was introduced in 1920.  Since 2003, Indonesia has become a major producer as well, due largely to cultivation of the less expensive black cardamom. Graphic to right includes both green and black cardamom.

Cardamom is used in Scandinavia in baked goods and candies, and in Europe and North America in curry powder and sausages, but it is in India, North Africa and the Middle East that the Queen of Spices reigns.  Cardamom is a common ingredient in Indian cuisine, from savory dishes to desserts, and is a familiar flavoring in North African dishes as well.  The largest single use of cardamom is in Arabian coffee, gahwa (قهوه عربيه).

Gahwa is a beverage of legend and ritual.  It is said to have Bedouin origins and be a key ingredient in Bedouin hospitality.  The proper preparation, serving and drinking of gahwa requires rituals complex enough to justify two blog posts, as you can see for yourself here and here, or at MiddleEast Arab for the Saudi Arabian version. 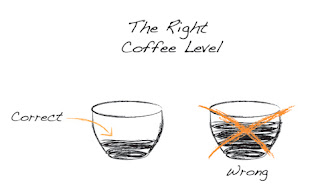 But gahwa does not have to be so inaccessible, and a modest version can be made simply by mixing cardamom and coffee.  Do skip the sugar, otherwise you won’t be able to appreciate cardamom’s subtle sweetness (have a few dates instead).  In gahwa recipes on the web, proportions of coffee to cardamom vary, from equal parts to predominantly coffee.  I prefer the latter, and add a quarter teaspoon of cardamom to the ground coffee in my expresso pot each morning.